I have been a huge fan of Condor knives ever since I picked up a Condor Bushlore several years ago. Today, we are going to do a long-term review of the Condor Atrox and see what it can do for you. I can save you the time if you aren’t interested in reading details…this knife is absolutely worth your money. Even if you have other big chopping blades, I doubt many are as cool or as fun as the Atrox. 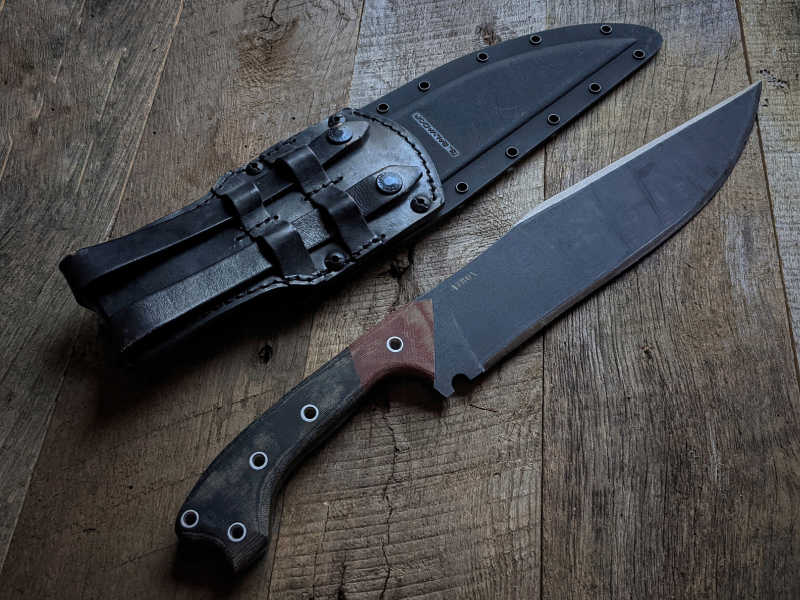 Do you know what a Seaxe is? The second I opened the box, that’s what I thought…this is what a Viking would carry!

During the middle ages, a warrior would carry two blades into battle: a long sword, used to keep an enemy at a distance, and a shorter blade, called a seaxe, meant for up-close encounters.  Although we no longer need to repel raiding Vikings, the size of the blades we carry into the field remains a factor today.

We carry longer or shorter knives based on their different utilities.  The seaxe remains a valuable tool today, bringing size and power to the outdoors whenever you need to clear brush, chop food, dismantle equipment, or protect yourself in nature. The Atrox Is A Monster Of A Knife

Knife manufacturers design longer blades for customers who have outdoor experiences that might contain life and death scenarios. The Condor Atrox may be the most formidable long blade on the market, and perhaps the most powerful to boot, capable of pulling its weight in the bush several times over.

Marketed as a machete, it’s closer in spirit to a seaxe, hence its Latin name, which means “terrible” or “cruel” (the root of the English word “atrocious” and “atrocity”).  Much like the dinosaurs are called terrible lizards because of their size and power, so, too, is the Atrox a monster due to its cutting power and size. 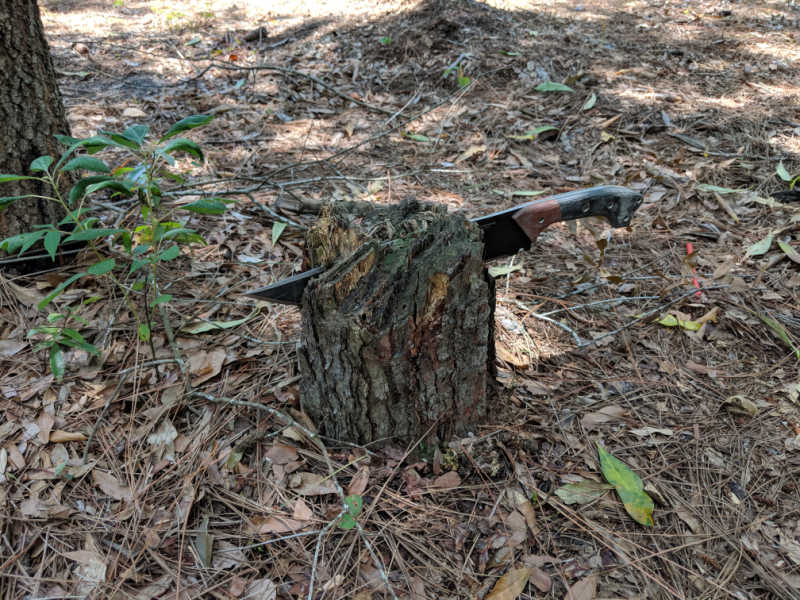 Let’s start with that size.  With a blade length of 10 ¾ inches and a total length of 17 ⅝ inches against a thickness of .18 inches, the Condor Atrox resembles its predatory bird namesake in terms of length and power.

The Atrox has a 1075 high carbon blade, meaning it’s made with steel that has carbon levels of about 1%, giving it greater strength and wear resistance than simple raw steel; high carbon steel is often used to make springs because it provides power without sacrificing flexibility.  You might imagine this type of knife is heavy enough to tire out your arms and wrists after a few swings, but at just 1lb 4oz (and 1lb 13oz in its Kydex sheath), it weighs less than a basketball. 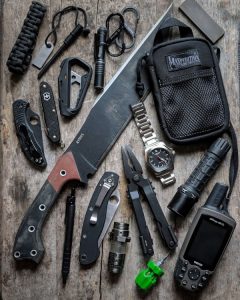 A Perfect One Knife Survival Companion

With a clip point and a full tang, the Atrox can be used for leverage when necessary without concern over its durability.  A full flat grind, furthermore, with a convex edge makes it possible to pierce with gusto.  A choil, located in the ricasso near the handle, improves the sharpening process and allows the blade to survive longer without recurving, while doubling as a rope socket in case you need to attach the Atrox to a pole for taking down a very large threat (or a very large potential meal).

Carrying a price tag below $150, finally, may make it feel like a more appealing purchase for its size than some smaller survival and chopper knives that cost two or even three hundred dollars.  Manufactured at the famous Imacasa factory in El Salvador, the Atrox is delivered to your doorstep already sharp enough to cut through solid wood, although some other reviewers noted it needed a touch-up on the grindstone. Mine came pretty decent right out of the box and I have no complaints. I have purchased other Condor products that did suffer from a poor factory edge. However, most Condor knives are 1075 or 1095 steel which sharpens up very easily with a simple stone. 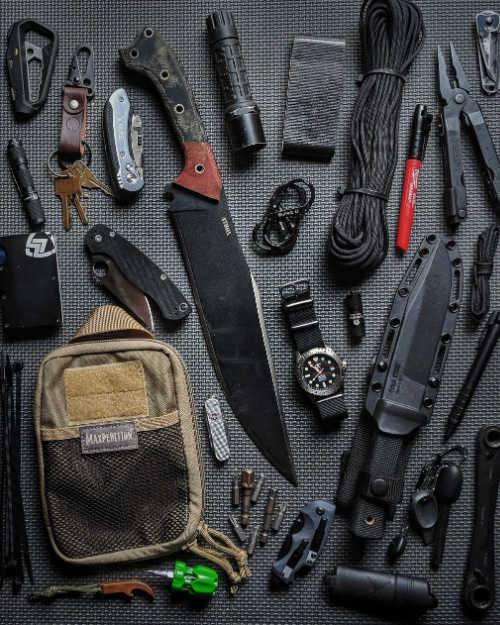 Condor’s role as an industry leader is older than our actual country.  Its predecessor company was founded in Germany in 1787, two years prior to the ratification of the Constitution, and built everything from military swords to farm tools.  In 2004, Condor emerged as a branch specifically for outdoor gear.

Their products are well-respected in the community and when the Atrox was introduced to the world at the 2018 Shot Show, it quickly became popular among outdoor enthusiasts from the survivalists to the weekend campers.

Joe Flowers, the Knife’s designer, referred to the Atrox as a “fighting survival Bowie,” a knife that he intended you to be able to use to live off the land in the backcountry.  I have to agree, it’s absolutely ready for a fight!  I have read many, many historical fiction books about Vikings and whenever I hold the Atrox, I feel like it’s exactly what a Viking warlord would have strapped to his belt to complement his sword or battle ax. 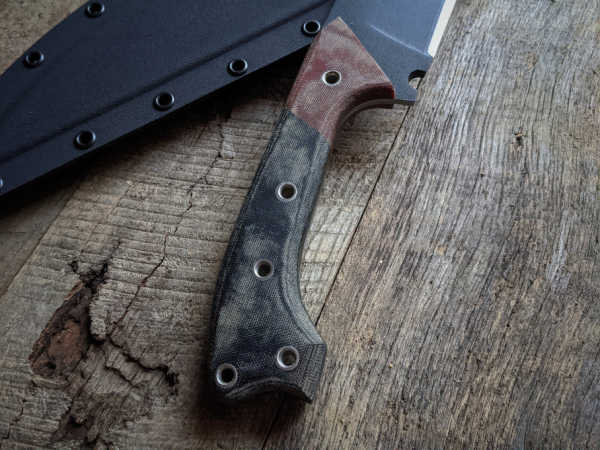 Condor’s own website description is: “a combination fighting survival tool that works double as a machete or a self-defense weapon.”  It will certainly do that, too…with ease. The whole thing just looks menacing strapped to your waist.

Whenever I test a large survival knife or chopper, I usually do the same set of cuts and tests so that I have something to compare them all to. I chop up the same old stump in the yard, cut a bunch of brush and vines, try throwing it, and, of course, I chop wood with it. The Atrox is a monster in the field and easily slices through green vegetation just like a machete. 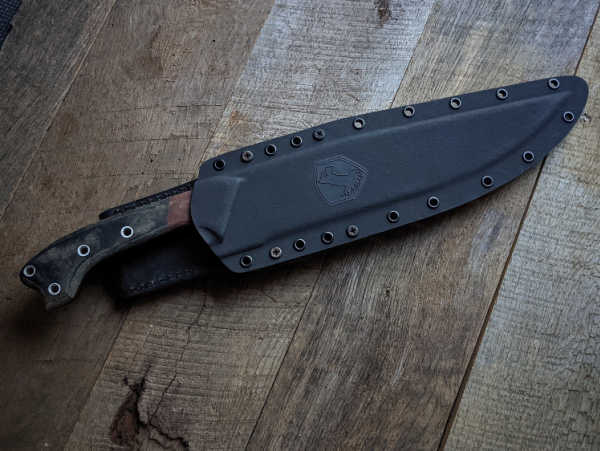 The thicker blade stock also gives it good cutting power when used as a chopper or ax for taking down small trees and processing wood. The micarta handle definitely dampens the vibrations that come through the blade when hitting it hard.

The backside of the clip point blade has a nice swedge that comes well formed from the factory, but not sharpened. You can easily sharpen this to a cutting edge or leave it as is for scraping and piercing.

I am not sure what the rockwell hardness is of the blade or the type of heat treating Condor used, but in my testing (which included cutting cans, bottles, and a lot of oak) the blade had no chips or rolls in it, a sign that the Atrox can handle the rough stuff.

I’m a huge fan of micarta, and the handle on the Atrox is a cool, two-tone micarta. If there is one drawback on the blade, in my opinion, it’s that the handle seems a tad on the skinny side for such a big blade. I wish it was a little bit larger in the center section. All in all, the handle is my only complaint…if you can even call it that. It’s really more of a personal preference thing.

While we’re talking about the handle, it does have a great feel in the hand and the back section near the end gets larger. This offers a lot of purchase when swinging and chopping and allows the knife to do more of the cutting than the shear force of the swing. 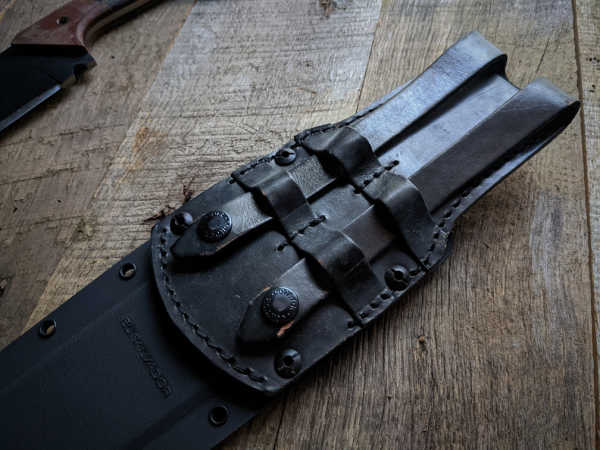 The sheath itself features a practical belt loop and rivets for attachment; the Atrox slides in easy and locks into place. It’s well made and offers a lot of different mounting options in case you want to secure it to a pack or perhaps inside a truck.

By now you know there are literally hundreds of options when it comes to seeking out a solid, big-bladed survival knife. In the case of the Condor Atrox, you get a well-executed, finely-made beast of a knife. It looks great and is extremely capable in the field. You could find something a little more utilitarian for less, but if the Atrox catches your eye, you will not be disappointed in the least.