I’ve gone out of my way to point out in past articles and reviews that it’s almost impossible to get a really top-quality bushcraft knife for less than $50. And yet… here we are again. I come to you with yet another budget-friendly bushcraft knife for your consideration.

Look, I can’t help it. I really want to find a great knife that won’t break the bank. The Elk Ridge model ER-555 bushcraft knife, as it turns out, is a pretty good entry into the truly rock-bottom-dollar category.

The Elk Ridge Bushcraft ER-555 knife comes with a price tag of around $25. I’ll tell you right now, it’s a great knife for the money. Is it a great knife, period? I probably wouldn’t go that far, but there’s a lot about the ER-555 that makes it a really solid choice for entry-level bushcraft.

This is a good-sized knife, but also a fairly lightweight one, considering its size. The knife sports a 5.5” blade with a 5” handle, and weighs about 8 ounces, not counting the sheath and other extras that come with it. The spine of the blade is 5mm (about 0.19) thick.

The Elk Ridge Bushcraft ER-555 Knife has a sturdy drop-point blade with a deeply bellied cutting edge. It’s fiercely sharp, and I was able to shave the hairs off my arm with it right out of the box. It has a high hollow grind with a secondary bevel, and it absolutely melts through wood.

The spine and upper portion of the blade above the grind has some sort of black powder coat on it, which I suppose is there for looks. It does look pretty cool, but it serves no other purpose that I can see, and it will begin flaking off as soon as you start using your blade.

The spine is squared off, so it makes a good spark off a ferro rod. Contrary to some other reviews of this knife I’ve read, you don’t have to remove the black powder coat to make a spark. That being said, the act of striking the knife against a ferro rod will start to remove the coating anyway.

The blade of the Elk Ridge Bushcraft Knife is made of 3cr13 stainless steel, which is… how shall I put this… cheap. But look, this is a cheap knife, so it shouldn’t be terribly shocking to learn that it’s made of cheap steel.

Ultimately, 3cr13 is not bad. It has great corrosion resistance, and it clocks a respectable 54 HRC on the Rockwell Hardness Scale. It offers respectable edge retention for a budget knife, but the good news is that it’s tough and easy to sharpen.

In terms of real-world use, I tested this knife out on a wide range of bushcraft tasks, and the blade performs quite well. It’s great for shaving tinder and making feather sticks, cutting notches in wood, whittling stakes, preparing food and cutting everything from ropes and paracord to small branches.

The ER-555 is also plenty tough enough for batoning. Having said that, I did start to notice some very small chips along the cutting edge after using the knife for some heavier chopping and batoning, so take that for what it’s worth.

I find the handle of the Elk Ridge ER-555 to be good and grippy. It’s made of Injection molded nylon fiber, and has a fine texture that helps it lock into my palm. It’s a big old meaty handle too. I think I have fairly average sized hands, but I could easily fit a fifth finger into the handle belly if I had one.

The knife comes with either black or green scales. I got the green, and I like the woodsy look. You can also choose the version with brown Pakkawood scales, which is quite handsome. In any case, the scales are easy to remove and replace should you so desire.

Okay folks, I think I’ve made clear by now that I think this is a pretty decent knife for the money. But one of its big selling points is that it comes with a bunch of “special features,” and I have to tell you, I kind of hate this stuff. So bear with me here.

The Elk Ridge ER-555 knife comes in a black nylon sheath, which is perfectly adequate, but also cheap and inexplicably complicated. It holds the knife securely and works for either vertical or horizontal carry, so it does the job.

But it’s also kind of a pain to get the knife in and out, and there’s a plastic buckle on the front that doesn’t seem to have any purpose, other than providing inadequate closure to a separate compartment that contains some of the other “extras.”

Those extras are a very coarse sharpening stone, a small ferro rod, and a metal key-like thing that I initially mistook for a striker to accompany the ferro rod. For the record, it 100% doesn’t make a spark. What it does do is serve as a key to unscrew the scales from the knife handle, revealing a hidden compartment within.

EXPLORE MORE
How To Find Fishing Bait In The Backcountry

Inside that compartment you will find a “survival kit” consisting of two sewing needles, a length of thread and three matches. Not strike-on-anything matches either, just ordinary matches with nothing to strike them on. As survival kits go, it’s better than nothing, but only slightly.

I don’t really think the skeletonized tang of this knife creates all that much of a weak point, so I don’t mind it all that much. But when I stop to think that metal was removed from the tang to make room for this worthless survival kit, I find it to be utterly ridiculous.

Who Should Buy It?

I don’t think it’s terribly controversial to say that the Elk Ridge ER-555 is aimed at beginners. It’s a quality starter bushcraft knife, and it would also make a perfectly good ‘beater’ knife for someone who already owns a better knife but wants something they don’t have to be too precious about.

I also think this knife could make a great gift for someone who is considering getting into bushcraft. There might be folks out there who think having a couple spare matches hidden inside their knife handle is the coolest thing ever, and this would definitely be the knife for them.

One thing I’ve seen this knife take a little heat for on YouTube and in other reviews is that it’s not really a bushcraft knife. And while it’s true that “Elk Ridge Bushcraft” is essentially just good branding, I think this is ultimately a non-issue.

We all have our own definitions of what a true bushcraft knife is and should be, and some of us are sticklers more than others. You could probably more accurately call this a camp knife or a survival knife if you prefer. Either way, I think it’s a solid budget-friendly knife that holds its own in the under $30 category.

Erin Channing is a budding writer, soon to be wife and all around fun seeker! No cats, no dogs, just a few fish and a pet parakeet named Jelly.  You can find Erika’s reviews and stories on several websites sites including Hardwork Theory, Medium, Little Miss Spider and more. New to camping and backpacking, she brings a fresh perspective to everything outdoors. A common question for new backpackers is whether they should bring a knife when they go backpacking. The answer is absolutely yes! A knife should definitely be on your list of items to pack when hiking and backpacking. I take a closer look at the Spyderco PM3 Lightweight, a knife I was excited to get to see if it could follow in the footsteps of other slimmed down versions that Spyderco has impressed us with. They did not disappoint here! The PM3 Lightweight is a great, light, good looking pocketknife. 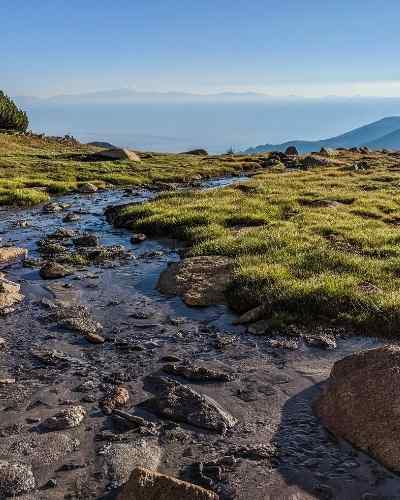 Part of the popularity of this knife has certainly come from its backstory—BPS Knives has been giving them out to Ukrainian soldiers since Russia invaded earlier this year—but I wanted to know if there was more to the Adventurer than just a good story.