Should I Carry Pliers In My EDC?

Do you need pliers for EDC? The answer is a definite yes and here is why!

Recently I was asked a question: is it better to carry a multitool, or a separate knife and a set of pliers for EDC?

The question stuck in my brain more than I expected. While there’s an undeniable convenience to having multiple tools in one compact package, I’ve always felt that it’s better to carry several tools that each do one job well, as opposed to one tool that does many jobs poorly.

I have been carrying a set of real pliers in my daily EDC for years. Either a 5″ Knipex or a small set of Channellocks. I recently did a in-depth review of the Knipex Cobra 5″ here.

I’ll tell you upfront that I’m biased in this regard. I’m a big pliers guy, and I’ve found countless uses for my EDC pliers. Along with a good knife blade and flashlight, they’re one of my most-used tools. You just never know when they’ll come in handy.

One of the most frustrating aspects of multitools has always been the pliers.

Yet, as multitools become increasingly….let’s say, “creative,” they’re becoming less and less functional. One of the most frustrating aspects of even the best multitools—and even I will admit that there are some good ones—has always been the pliers.

Multitool pliers, almost without exception, have several issues that make them difficult and at times painful to use. Those issues are:

If any pair of “real” pliers had those shortcomings, you’d throw them away and get a better pair of pliers. But many of us are willing to accept the limitations of a multitool because they are, undeniably, convenient.

A pair of quality EDC pliers beats a multitool every time.

Even so, I would make the case that a pair of quality EDC pliers beats a multitool every time. Luckily, we live in an age when we have several good options when it comes to pliers that are small and lightweight enough for everyday carry.

Actual pliers beat multitool pliers across the board.

My personal pick for best EDC pliers are the 5” Knipex Cobra pliers. They weigh just 0.81 oz. and measure a mere 5 inches long, making them eminently pocketable and great for everyday carry. The Knipex pliers have self-locking, offset jaws and an easy-to-use, push-button adjustment that can be used one-handed. They’re made of hardened steel, can grip just about any shaped object, open up to 1.75” wide, and have a pinch guard to keep your fingers safe. They beat multitool pliers across the board.

And look, your specific needs may not be the same as mine. We all tailor our EDC choices based on our lifestyle. So if you’re trying to decide whether to carry pliers, ask yourself how often you might use them.

Personally, I’ve found myself in countless situations when having a quality set of pliers close at hand saved the day. Whether you’re a plumber or carpenter who needs pliers for work, or a camper or cyclist who might want to carry them in case of emergencies, they are endlessly useful.

Why do people carry EDC pliers?

Match a quality set of pliers with a good knife, and you’ll be ready for almost anything. And if you miss some of the other features on your multitool, make it a Swiss Army knife. Victorinox makes some classic Swiss Army knives that offer all the advantages of a multitool with none of the drawbacks or complications.

I’ll say one last thing here, which is that I’m not anti-multitool. I totally get that they’re convenient, and there’s no reason not to toss one in your glove box or hiking pack just in case you one day need it. I simply believe that it’s best to have the right tool for the right job whenever possible. And with several great EDC pliers on the market, the right tool is not hard to come by. 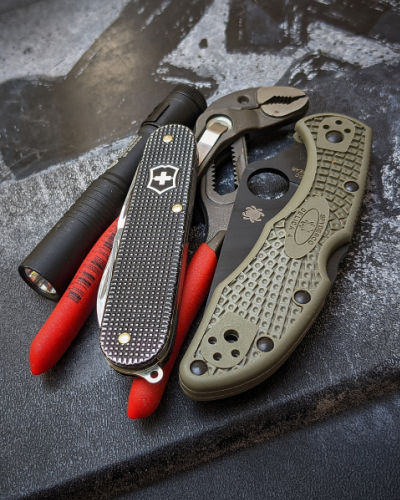