What Is The Best Swiss Army Knife To Buy

It’s no secret that I have a soft spot for Swiss Army knives. I still have the first one I ever owned, a Victorinox Recruit that has been in my pocket since I was a kid 38 years ago. If that doesn’t speak to the longevity of these knives, I don’t know what will.

That’s part of the reason Swiss Army knives—or SAK, in the parlance of the Internet—are so beloved. Check out SAKWiki to see just how nuts people are about these things. The Alox in particular has achieved almost cult-like status, and there are several reasons why many enthusiasts, myself included, consider it to be the best of the best.

We are going to go in depth about why the Alox Pioneer X is the clear winner and then we are going to give you several more who deserve to be on the list of the best Swiss Army Knives.

With the Victorinox Pioneer X, you just can’t beat the size, quality of build and of course the history. The Pioneer X has just the right set of tools for a great EDC pocketknife and is ready to handle anything you can throw at it.

10 Reason Why The Pioneer X is the Best SAK

Here’s one last bonus reason: it’s collectible. I know this doesn’t really matter in terms of the day-to-day functionality of your SAK, but Victorinox puts out a limited edition of their Alox series every year in a different color. Next year, it’ll be on eBay for twice the original price. One of the joys of being a total knife nerd is that you get to geek out when you find out—wow, you can get an Alox in orange this year!

The Victorinox Alox Pioneer X Swiss Army knife is a classic. It’s an easy knife to carry in your pocket every day, and it holds up well as a camp knife, or any other use one might have for it. Let’s take a closer look at why this SAK really stands out in a crowded field.

The basic frame of the Victorinox Alox Pioneer X is built around a 93mm platform (SAKs are commonly measured by the length of the chassis, in millimeters). That translates to a folded length just shy of 3.7 inches. The Pioneer X is right around 0.6 inch thick.

In terms of weight, the Alox scale makes this a bit heavier than your typical SAK at 3.3 ounces. It’s not heavy by any means, but it’s a substantial knife that does weigh a bit more than a smaller Swiss Army knife, or one with a plastic scale.

Personally, I like that. Some Swiss Army knives can feel a bit dainty in the hand, but this one doesn’t. It has a confidence-inspiring heft to it, and it’s a very comfortable pocket carry.

One design characteristic that sets the Pioneer series apart from other Swiss Army knives is that all the tools open from the same side of the handle, leaving a smooth spine on the other side. I find that this is great for EDC, as it slides in and out of my pocket more easily.

Each tool is held in place by a backspring rather than a true locking mechanism. That’s pretty typical of Swiss Army knives, but it does necessitate a bit of care while using the blade. Still, the springs provide snappy closure and definitely do a good job keeping each tool in the open or closed position, as the case may be.

Other than the scales, which are made from anodized aluminum with Alox texturing (one might describe it as a somewhat “waffle-like” texture) the entire Pioneer X Swiss Army knife is made of stainless steel. Let’s talk about that.

As I mentioned previously, stainless steel has its pros and cons. Rust-resistance aside, stainless steel is more malleable than carbon steel. This makes it much harder to break. A stainless steel tool will bend before breaking, which is great for heavy duty use. One thing to be aware of is that the blade on this SAK will dull more quickly than a carbon steel blade.

Fortunately, the stainless steel used to make the Alox Pioneer X is very easy to sharpen. I would argue that the ability to sharpen a knife with a whetstone is a skill every knife owner should learn, and this is a great blade on which to hone your skills.

Tools – What’s Included and What’s Not

Let’s start with what the Alox Pioneer X doesn’t have. Absent are the tweezers and toothpick, which would fit into slots at the end of a typical Victorinox Swiss Army knife. Whether or not you consider this a loss depends on how often you would use them (or lose them).

The Pioneer doesn’t have a corkscrew either. That might be a dealbreaker for some—I know it’s a classic SAK component—but I have my own corkscrew in a kitchen drawer at home, and I don’t often need to open a bottle of wine in the backcountry. So, for me at least, I don’t miss the corkscrew all that much.

Here’s what is included in the Victorinox Alox Pioneer X:

All of the above do the jobs they’re intended to do. The scissors are a particularly noteworthy addition to the Pioneer X, which is the first Pioneer model to have them. The reamer/punch tool is technically made for repairing leather but has a multitude of uses. My grandpa called it a “fingernail cleaner-outer.”

All of the tools come well-oiled, and are good and “snappy” as you open and close them. Some are a bit tight straight out of the box, but they will loosen somewhat with time and repeated use.

Whether or not you choose this Swiss Army knife might come down to whether or not you miss the corkscrew and tweezers. As for the toothpick, has anyone ever really used it to pick their teeth? Nevermind. I don’t want to know.

For my money, the inclusion of quality scissors and the durable, grippy Alox scale far outweigh the absence of other tools. This knife gives me everything I need, and nothing I don’t. The 93mm frame is just the right size in my hand and in my pocket. Overall, the Victorinox Alox Pioneer X is an able camp knife as well as an essential EDC tool.

At this point, I think I’ve come across loud and clear that the Victorinox Alox Pioneer X is my favorite Swiss Army knife. Having said that, it might not be the SAK for you, and I totally get that. There are a lot of other very good Swiss Army knives to choose from, and these are five runners-up that are absolutely worthy of consideration. I own everyone of these Swiss Army knives on the list except the Swiss Champ:

Our Top Choices For The Best Swiss Army Knife To Buy Are As Follows:

The Alox Cadet is very much the little brother to the Alox Pioneer X. It has the same high quality aluminum Alox textured scales, but in a slimmed-down package with a 3.3 inch (84mm) frame. The tool assortment is slightly different, but no less useful.

The absence of scissors is a big difference, and one that allows the Cadet to be significantly slimmer than the Pioneer. Gone too is the reamer/punch tool, and in its place is a file and nail cleaner. Choose the Cadet if you’re looking for a minimalist SAK with Alox scales, and don’t care much about whether you have scissors or not.

Read The Full Review Of the Alox Cadet Here

As you can probably guess from the name alone, the Mini Champ is a great choice if you’re looking for something on the smaller side. This 2.3 inch (58mm) tool packs a surprising array of features—18 in total—into a package small enough that one could easily carry it on a keychain.

Two blades and a pair of small scissors are present and accounted for, along with a file, small ruler, and your classic tweezers and toothpick. There’s also a tiny ballpoint pen, which is great if you’re the kind of guy who often forgets to bring a pen. The Mini Champ has the classic red Victorinox thermoplastic scales and weighs just 1.6 ounces.

With a 3.6 inch (91mm) frame and 12 total tools, the Victorinox Tinker is close to the same size as the Pioneer X, but its tool selection is skewed in a slightly different direction. It’s made with crafty folks in mind, the idea being that this is a knife you can use to fix, build or hack just about anything.

It’s a pretty cool knife. Included are two flathead screwdrivers and one phillips head, along with a reamer/punch/sewing awl that has a hole for thread. Bottle and can openers are in place, along with a large (2.45”) and small (1.25”) blades, toothpick and tweezers. No scissors, I’m afraid. The scale is classic red.

Just as the Tinker is aimed at the craftsman, the Trekker is made with the outdoorsman in mind. At 4.4 inches (111mm) it’s one of Victorinox’s larger Swiss Army knives, but still a reasonably light one at 4.6 ounces. There’s a saw that’s handy for small branches, and a can opener for opening cans of beans to cook over the fire like a hobo.

What really sets this knife apart is its partially serrated main blade, which has a locking mechanism and can be opened one-handed. It’s kind of like if a Swiss Army knife and a Spyderco knife had a baby. The scale is black polyamide (basically Nylon) and unlike a typical SAK, it’s contoured to fit in hand very nicely.

I must also mention that the Rangerwood 55 is a close choice that’s quite similar to the Trekker. It has a large locking blade and a very handsome walnut wood scale. See some pictures on Amazon.

The Trekker made our list for best backpacking and hiking knives. You can read about it here.

The Swiss Champ is one of those giant SAKs that borders on gimmickry, but if you really want a knife with every tool under the sun, then here you go. The Champ uses the same 3.6 inch (91mm) platform as the Tinker, but it’s also 1.3 inches thick because there are so many features packed into this thing.

I have to admit, some of these 33 functions are pretty cool. I’m definitely not going to list them all, but some of the more noteworthy are a fish scaler, metal file, metal saw, magnifying glass (great for starting fires), pliers, ballpoint pen and “multipurpose hook.” And yes. It has a corkscrew.

Okay, I know I said five, but I have to mention just one more. The Victorinox Onyx Spartan is just too cool-looking to pass on. The whole knife is a monochrome black color, achieved through a polispectral process that creates a much more durable finish than typical black-coated knife blades. The Onyx Spartan also has black thermoplastic scales to match.

Aside from the novelty of being all black, this is also just as well made and utilitarian as any SAK. It’s on a 3.6 inch frame, weighs just 2.1 ounces, and has 13 total functions including large and small blades, corkscrew, reamer/punch/awl, toothpick and tweezers, and a lanyard ring with an actual lanyard attached to it. 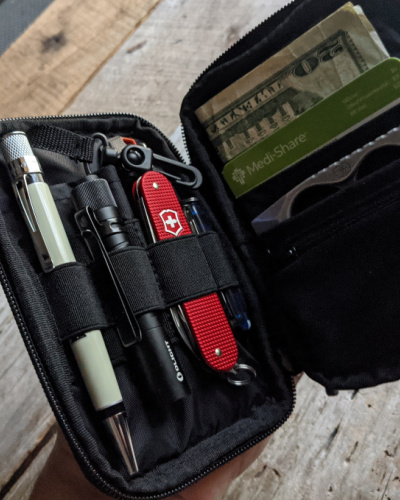