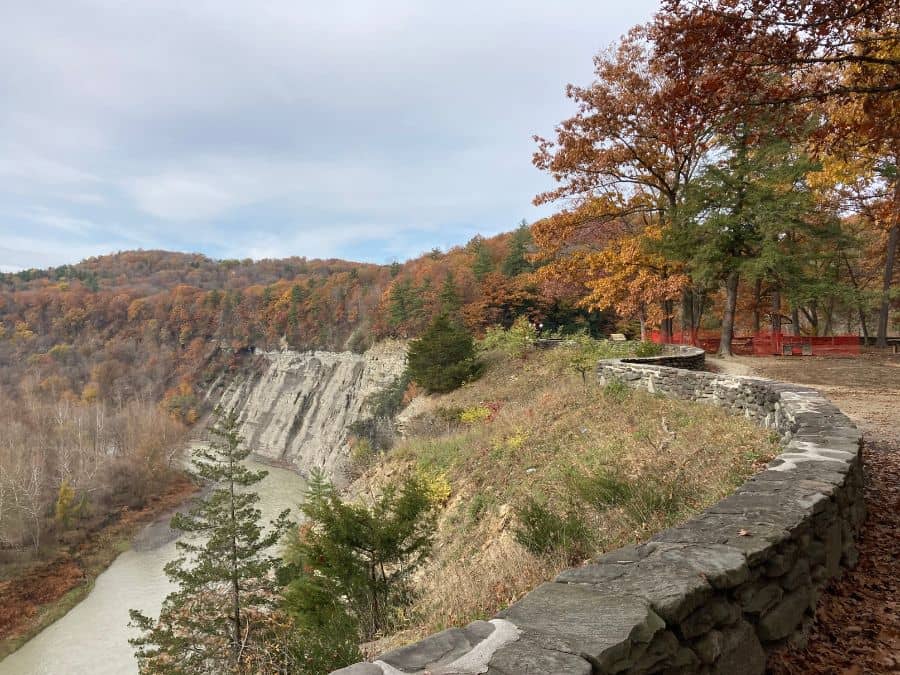 There are certain wild places that make one wonder what the early explorers who stumbled upon them must have thought. Letchworth State Park is one of those places.

It’s a bit of an anomaly in the landscape of Western New York State, a landscape that could generally be described as rolling and pastoral, but seldom rugged or dramatic. To find a vast chasm cut through the heart of this landscape must have given those old explorers quite a start.

Today, Letchworth State Park is one of New York’s most visited and most beautiful state parks. It spans over 14,000 acres, and at its heart is the Genesee River Gorge, which has been dubbed by some as the “Grand Canyon of the East.”

It’s a fantastic place to camp, hike, do a little fishing, and gape in wonder at nature’s capriciousness. The gorge, with its three waterfalls and 600-foot rock walls, never fails to impress.

The Lay of the Land

I highly recommend picking up a map upon arrival, or better still, download the official map from New York State Parks. It can be tough to get your bearings here without one.

Letchworth is a long, narrow park, stretching about 17 miles end-to-end. It’s roughly bisected by the Genesee River, which snakes through the park from south to north and divides it into two halves. On the west side of the park is where you’ll find most of the developed amenities—campgrounds, cabins, scenic overlooks, welcome center, gift shop, etc.—and that’s where most people go.

The east side of the park, on the other hand, is densely wooded and almost completely undeveloped save for a 22-mile hiking trail that meanders from one end of the park to the other. This is where you should go if you want to do a bit of backpacking (it’s also open to hunting during certain seasons) but the west side has all the amenities.

The campground at Letchworth State Park is shady and secluded, with over 250 campsites spread out among several loops, mostly tucked away among oak, maple, and hemlock trees. Most sites are spacious, and each is appointed with a standard-issue picnic table and campfire ring.

The campsites include a mix of electric and non-electric sites, suitable for tents and RVs. The campground includes about 80 rustic cabins as well, which are great for anyone who wants a roof over their head and a few semi-modern comforts.

Ultimately, the campground is a perfectly pleasant place to cook your meals, enjoy a nightly campfire, and sleep. But the real joys of this park come from exploring beyond your campsite.

All told, Letchworth State Park has 66 miles of hiking trails. A lot of them, along with some of the park’s oldest bridges and overlooks, were constructed by the Civilian Conservation Corps in the 1930s. Remnants from that time are all over Letchworth, including the site of an old CCC camp where the workers lived while building the park.

My favorite thing to do at Letchworth State Park is pack a day’s worth of supplies in my backpack, pick a trail, and just wander around. Many of the park’s trails are interconnected, so countless loops are available. Cell service tends to be spotty, so make sure you have a paper copy of that map we talked about.

The park also has a great museum, dedicated to the geological history of the park, and to the Seneca tribe that once called this land home. Several trails are open to horseback riding and mountain biking, and portions of the Genesee River offer whitewater rafting and kayaking.

EXPLORE MORE
The 12 Highest Peaks of the Southern Appalachian Mountains

The river is known as a great smallmouth bass fishing stream too, but the fish seemed to be elsewhere during my last visit. There’s a fishing access site within the park at the St. Helena Picnic area, and you’ll be able to see with a few casts whether they’re biting or not.

The St. Helena Picnic Area is also the starting point of one of my favorite trails in Letchworth State Park: the Gorge Trail. The terrain is easy to moderate, and this trail definitely gives you maximum bang for your buck in terms of scenery.

Stretching 7 miles end-to-end, the Gorge Trail hits all the major gorge overlooks, and offers views of the Lower, Middle, and Upper Falls. These are the three main waterfalls on the Genesee River, but there are about 50 smaller ones on various creeks and tributaries that enter the gorge. The Upper Falls, with a towering railroad suspension bridge spanning the rock walls above it, has always been my favorite.

As I mentioned above, the opposite side of the park, away from all the developed amenities, is pretty much just woods. I love this side, and it’s home to my other favorite trail in the park: the 22-mile Letchworth Trail. You can hike here all day and seldom see another human being.

You don’t see the river or the gorge much along the Letchworth Trail. The trail traverses a mostly wooded landscape, frequently dipping down and then back up out of the little gullies created by creeks that drain into the river. There are two minimal lean-to shelters spaced out along the trail. I’ve used the first one as a convenient lunch spot, and the second one to sleep in.

Only toward the northern terminus of the trail do you start to get glimpses of the river, culminating with an expansive vista across one of the widest and deepest points in the gorge. A little farther up the trail, you’ll reach the site of the Mount Morris Dam.

You wouldn’t guess it if you visit Letchworth in summer or fall, when the Genesee River is a mere trickle, but this is a wild, raging river in spring when it’s fed by snowmelt from the surrounding hills. It used to be a lot wilder before the dam was built. During the flood of 1972, it saved the city of Rochester, about 35 miles downriver, from untold destruction.

Looking at the river in any season, it’s hard to fathom the force of the water over countless thousands of years that led to the creation of this mighty gorge.

EXPLORE MORE
The 12 Highest Peaks of the Southern Appalachian Mountains

Letchworth State Park is tucked away in a quiet, unassuming corner of Western New York, and one could easily drive right by it without ever glimpsing the wild scenery inside its boundaries. Next time you’re in that neck of the woods, do yourself a favor and check it out. 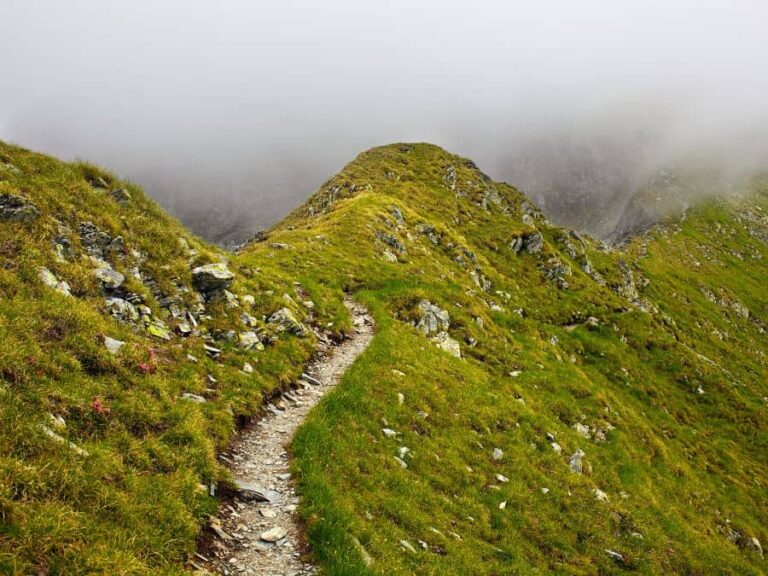 In this article, we’ll explore the 12 highest peaks in the Southern Appalachians, which also happen to be the 12 highest of the eastern U.S. (Indeed, more than 20 Southern Appalachians peaks are higher than Mount Washington.) This isn’t mere geographic trivia; every peak on this list is, beyond its elevational superlatives, a special place, and well worth tracking down on an outdoor adventure. As you’ll see, some are much more difficult to access than others. 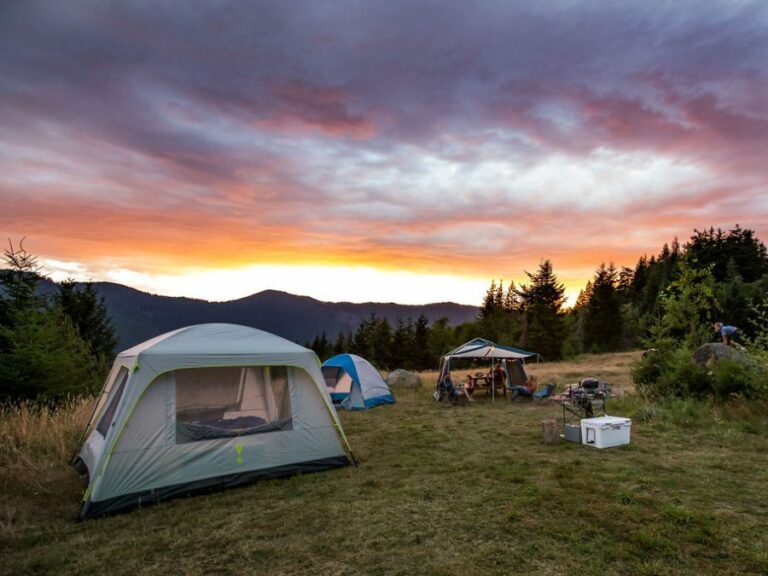 Are you looking for the best spots on the Blue Ridge Parkway to go car camping? Check out our favorite spots and get ready for some adventure and amazing scenery.